Members of 02 January, 1973 intakes/members of the Nigerian Defence Academy (NDA) have applauded the Armed Forces of Nigeria for its resilience and doggedness in the fight against terrorism, banditry, kidnapping and other organised crimes in the country.

This commendation was made on Friday, November 18, 2022, by the President of the set, Major General Abdulmalik Halidu Giwa (retd), while declaring the two-day AGM opened at the Officers’ Mess of the Nigerian Armed Forces Resettlement Centre (NAFRC), Oshodi.

He regretted the inability to meet annually due to COVID-19 coupled with the intermittent deaths of some colleagues.

Speaking to our Correspondent shortly after declaring the AGM opened, he explained that despite all odds, he called on members to continue to focus attention on prosperity that strengthens friendship, noting that 02 January 1973 sets stood out until they retire about 16 years ago.

Therefore, “we should work towards landmark achievements we are known for.”

Gen Giwa (Taimako NUPE) saluted the courage exuded by the troops that led to dealing mercilessly with the criminals, reiterating that “all we want to see is an end to all of them.”

“The troops are dealing effectively with the bandits and kidnappers immediately after President Buhari gave them order and some of them are on the run.”

He noted that as a regimented force, they succeeded in passing the regimentation to the junior Officers and are fully behind them hence they have always availed them of their wealth of experience and necessary contacts in support their activities. 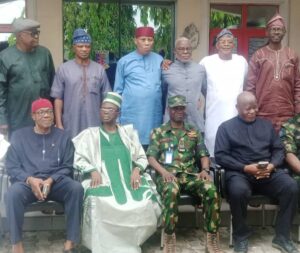 On what the force should do to reinforce strategies against the nuisance value of the bandits and kidnappers, he added, “They must be proactive, engage in diligence intelligence as these constitute the parameters for proactiveness. Before the devils and criminals come on board, you will neutralise them inboards.

“We would continue to have regular contact with them for the betterment of the country. However, we are seeking more fora for interaction moving forward,” Gen Giwa, Chief Abanidaro of Okorogbede and Oghigha 1 of Aka Ewe reemphasized.

On the Welfare of retired personnel, the retired members thanked the Commander-In-Chief of the Armed Forces, President Muhammadu Buhari for approving funds to pay Military Veterans Security Debarment Allowance (SDA); an indication of Federal Government conscious efforts to better their welfare needs.

While commending the role played by Retired Army, Navy and Airforce Officers (RANAO) in ensuring that the welfare of veterans is met, he noted that their steadfastness galvanised in the approval of funds needed for the SDA and payments of Consequential Minimum Wage to all the members of the Armed Forces.

He appreciated the senior retired officers for their commitment to the job they left years ago but observed as the world is fast becoming a global village due to technological innovations, it is heartwarming seeing all of you physically without necessarily calling in as members.

Adding that he has so much to learn from the retired senior officers, he noted that “The spirit of being together can’t be defeated. We are on the brink of living the service, it’s good we are meeting here where we prepare officers for retirement.

The retired officers were also taken through health lectures on “Life-threatening diseases” as well as medical checkups.

The Nigerian Defence Academy (NDA) was established on 5 February 1964 in response to the Defence needs of independent Nigeria to train officers for the Armed Forces of Nigeria.