The 82 Division, Nigerian Army, Enugu on Thursday emerged winner in the Inter-Formation Platoon Combat Swimming Championship hosted by the 81 Division in Lagos.

The closing ceremony was held at the Old Slave Village Lagoon side, Badagry after flagging off the Championship on Monday at the National Stadium Swimming pool, Surulere.

The championship which was in two phases kicked off on November 27, 2022, at the National Stadium Surulere, Lagos. 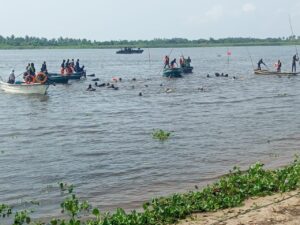 Other dignitaries at the closing ceremony included the Atan Of Badagry who was represented by one of the Palace Chiefs, Tune Duro and other top Officers who came to represent all other security agencies.

The Chief of Army Staff reminded the Soldiers to use the experience gained from the championship to improve their fitness and always be ready to discharge their assignments effectively.

The Army Chief presented the winner’s trophy to the 82 Division who came first. Also, trophies were presented to the Second and Third positions – 1 Division, Kaduna, and 2 Division, Ibadan respectively.

However, the Wooden Stick Spoon was presented to 8 Division, Sokoto who came last in the competition four-day competition.