After six days of competitive games in various tracks and fields and other indoor activities, the Nigerian Navy Games 2022 in Lagos State came to an eventful end with Eastern Naval Command dusting other commands to emerge as the overall champion.

Declaring the games closed on Tuesday evening which was held at the NN Ultra-Modern Sports Complex, Navy Town, Ojo, the Special Guest of Honour and Minister of Defence, Major General  Bashir Salihi Magashi (Retd), commended the Navy and all the athletes that won laurels during the highly competitive games.

He said the NN has demonstrated using sports, the seriousness it attaches to physical fitness and mental alertness which members of the Armed Forces require to overcome security challenges across theatres of operations. 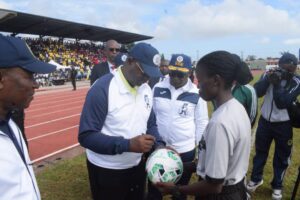 While pledging its support, Gen Magashi added that he would sustain its efforts to support the Navy as the country prepares for the general elections.

He acknowledged the force’s enormous role in securing both the maritime domain and internal security especially in supporting other sister services and law enforcement agencies in addressing current insecurity in various parts of the country.

In his words, “The desire by the Nigerian Navy to commit resources towards ensuring personnel maintains requisite standards of mental and physical wellbeing is commendable. 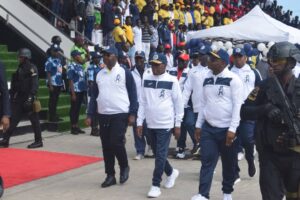 “I am also aware that new discoveries and talents, that would represent the Nigerian Navy and the nation at national and international competitions have been identified. I congratulate the Eastern Naval Command for topping the medals table.”

In his closing remarks, the Chief of Naval Staff, Vice Admiral Awwal Zubairu Gambo expressed satisfaction displayed by the over 2,000 contestants from all naval bases and establishments as well as invited athletes from sister services and other security agencies.

He observed that the games provided a tremendous opportunity for participating teams to showcase their levels of physical fitness and mental alertness, which are essential for combat readiness. 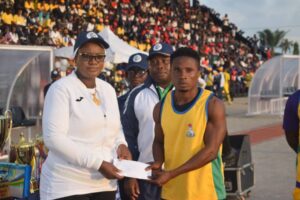 While congratulating both the winners and losers, the CNS reiterated that: “It is one thing to win medals and another to hold onto the medals won.  I will, therefore, encourage you to hold unto these medals as well as improve on winning more medals in subsequent competitions and games,” Admiral Gambo reiterated.

In his goodwill message, the Minister of Sports, Youths and Development, Mr. Sunday Dare observed that the games brought out the best among personnel, and encouraged the force to leverage on the achievements just as it was about 30 years. 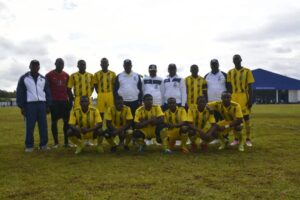 “Life is a sport, someone has to win and lose but the battle has to continue. In sports, we are all winners,” Dare pointed out.

In his welcome remarks, the Chief of Administration, Naval Headquarters, Rear Admiral Jason Gbassa said the highly competitive games pushed naval personnel to their limits for laurels, stressing that the primary purpose of the games is to foster relationship, camaraderie, and bonding has been achieved.

“With 1,820 athletes participating out of which 1,029 competed in the 22 Games, new talents have been discovered during the games,” Rear Admiral Gbassa explained. 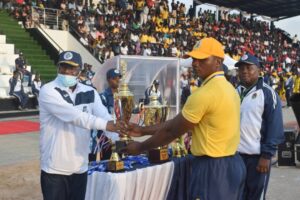 The most exciting moments of the closing games were the football match between the Eastern and the Central Naval Commands. After a goalless draw which culminated in a penalty shootout, the Eastern Naval Command won the trophy.

With the Games, Touch put off and the games flag lowered, all the activities came to a close.

The well-attended closing ceremony had several former CNS in attendance, including the Governor of Lagos State, who was represented by the Speaker of the House of Assembly among other personalities.

It would be recalled that the President and Commander-In-Chief of the Armed Forces, Muhammadu Buhari had on the 8th of September flagged off the games with the formal commissioning of the Ultra-Modern Sports Complex at the Navy Town, Ojo.