This year, the club put together another excellent Carol evening which she does anually. This has become, over the years, a significant event to the members of the Club, as a way of sharing the feeling of togetherness and love, which is the essence of the Season, and in the spirit of the club motto *One Club, One Love*.

With the opening Hymn: Once in Royal David’s City to call to worship; all other various Carol hymns and solo renditions brought bliss to the gathering.

LLTC 2022 Carol of Nine Lessons was excellently organised by the Carol Committee headed by the Chairman, Evangelist Adekunbi Akin-Taylor, the Club’s Publicity Secretary. The Choir, Melody Choral Group was led by Mr Ajayi Clegg; and the officiating Priest was Ven. Segun Ladeinde of the Diocese of Lagos Anglican Communion.

The gathering which brought together different faith adherents, from all walks of life that graced the event had in attendance many of the Club’s Trustees, Past Presidents, Executive Committee Members and other distinguished members of the club who were very supportive of the event. The various Christmas Carol Lessons were read from the first to the ninth lessons by carefully selected members of the club in recognition of the Club’s diverse population brought together in the spirit of One Club One Love.

The evening was graced with the presence of some pupils and students of Charlie Marie Group of Schools, Labori Oloja, Ogun State. They rendered a Special Carol and a powerful drama presentation of a song of hope. 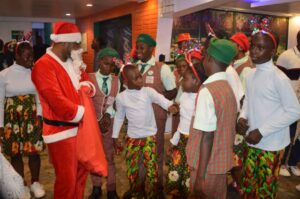 Speaking with reporters, the President of the Club Barr, Kolade Olutekunbi said the gathering is significant as both Christians and the Muslim faith celebrate Christ together to launch everyone and the club management into the New Year in prayers. He noted also that most of the club members only travel after the Christmas Carol for prayers, blessing and to socialize while he congratulated the Chairman of the Carol Committee, Evangelist Adekunbi Akin-Taylor for organising an excellent Carol evening.

The Priest expressed “that genuine love is required for a better nation” and reminded all of the beauty of the season as exemplified by the Lord Jesus Christ, as all humans are created to love. He also advised that people should come, taste and see that the Lord is good, that outside God there is nothing else.

In her remarks Evangelist Adekunbi Akin-Taylor, the Club’s Publicity Secretary, stated that the Carol is a usual tradition of the Club for decades of years. She reiterated that the Carol brings different faiths together, and unites them as one. Speaking about the attraction of club, she said the club is not just a social group, but a sports and recreation club. Although specifically a tennis club, there are other sections like Squash, Snooker/Billiards, Table Tennis, Darts and Other Games. She informed that club members are carefully selected and vetted before they are admitted. And being a member of the club you have to abide by the code of conduct of the club and abide in integrity and love as the slogan of the Club is ‘’One Club, One Love’’. She concluded that Lagos Lawn Tennis Club, founded in 1895 is Nigeria’s foremost & oldest club in Sub-Sahara Africa.

On his part, Dr Akeem Abiodun Apatira the Club’s Honorary Secretary, said that he is a Muslim who takes part in the Carol every year and no discrimination to celebrate the season.
He emphasized that during the Muslim festivals, the Club members come together to mark the occasion as one also.

The audience cheered the pupils children of Charlie-Marie Group of Schools as they delighted the audience with such a commendable rendition of the song ”Joy to the World” while the Priest Ven. Segun Ladeinde gave the exhortation from the scriptures, noting that ‘’Christmas Carol is a Symbol of God’s Love’’.

At the close, all Carol Committee members, the Priest, Choir, Executive and Distinguised members, and other guests present were appreciated. The Minister of Youth and Sports Development, Sunday Dare has commended Delta State Government for