The President and Commander-in-Chief of the Armed Forces of the Federal Republic of Nigeria, Gen. Muhammadu Buhari has said the National Youth Service Corps (NYSC) has created more opportunities to unite Nigerians since its establishment in 1973 than any other initiative in the country.

The president, on Tuesday, called on the nation’s security agencies to step up their efforts to adequately secure the country, expressing surprise that only 2.5 percent of the arable lands in Nigeria are being cultivated at the moment. 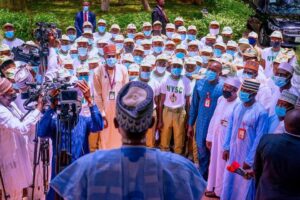 In a statement by the Senior Special Assistant, Media and Publicity to the President, Garba Shehu, Buhari, in his country home, Daura, Katsina State while playing host to youth corpers, expressed his deep attachment to the NYSC scheme and impact so far, saying it broadens the horizon of citizens, opens up opportunities and enhances understanding of cultural differences.

The president said he had consistently commended former Head of State, General Yakubu Gowon for the initiative, which had created more opportunities for uniting the country.

In his words: “Every time I meet with former Head of State, Gen. Yakubu Gowon, like recently, I still commend him for the initiative of the NYSC. The NYSC is spectacular in many ways.”

The President said the NYSC scheme was well-thought-out to unite the country through understanding.

“I feel very strongly about the NYSC and I am wishing you all the very best. I assure you that you will be much better as Nigerians after your experience,” he added.

President Buhari urged the youth corps members to make the most out of the opportunity of travelling around the country, especially, in understanding different climates, cultures, languages and views on life.

“Some of you have come from Port Harcourt, Lagos and Calabar and you can now feel the heat of Daura and how close it is to the desert”.

The President, in the mood of the festive season, gave the corps members two cows from his farm, 20 bags of rice and one million naira. 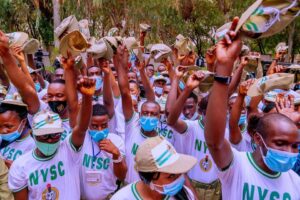 Earlier, the Corps Liason Officer, Umaru Babayo, thanked the President for all the efforts and sacrifices to restore peace in the country, and the policies to diversify the economy, with agriculture as the main driver.

He said the Emir of Daura, Alhaji Faruk Umar Faruk, had shown a lot of kindness and warmth to corps members as well in his domain, appreciating the community for always supporting them.

Babayo assured the president of their prayers for a successful time in office, and God’s providence in decision making that would move the country forward.

On security, the president in yet another release by Shehu, mandated security outfits to be more relentless in maintaining peace in the country and ensuring a better and harmonious relationship with communities so that they could glean intelligence.

According to him, the security situation had improved considerably overtime in the North East and South-south, and efforts were being made in North Central and North West, assuring them that more would be done to fish out those that had been troubling the peace of the nation and citizens.

President Buhari also urged more Nigerians to embrace farming, saying he was surprised to hear that only 2.5 percent of arable lands in the country was being cultivated.

The President, who mentioned this to journalists at his Daura residence after the Eid-el-Kabir prayers, stated that the Presidential Economic Advisory Council had notified him that only a small percentage of the land in the country had been used for farming, directing security outfits to work more with communities to create a more friendly environment for farmers.

At the prayer ground, earlier, the Emir of Daura, Faruk Umar Faruk, called on citizens to be more supportive of the President so that he could actualise his vision of improving security and boosting the economy.

He said: “Since the President came into power, we have seen some positive changes in the country. May God continue to strengthen the President with good health and courage to bring peace to the country. God will not allow Nigeria to see shame. God has been keeping the country and he will keep the country.”