The Nigeria Police Force has said it is set to unveil its sporting talents at the 13th Biennial Police Games scheduled to take place in the beautiful and serene city of Uyo, the Akwa Ibom State capital from November 23– 30, 2022.

Force Public Relations Officer, CSP Olumuyiwa Adejobi, in a statement in Abuja on Saturday, September 10, 2022, disclosed that the week-long historic sporting event will be declared open by the Special Guest of Honour, the President and Commander-in-Chief of the Armed Forces, Federal Republic of Nigeria, President Muhammadu Buhari.

Adejobi further said that the event will also have the Executive Governor of Akwa Ibom State, His Excellency, Udom Gabriel Emmanuel, as the chief host, and other very important dignitaries.

According to the statement, over 4500 male and female police athletes have been drawn from the 17 Zonal Commands and the Force Headquarters to feature and compete in several indoor and outdoor sporting activities. 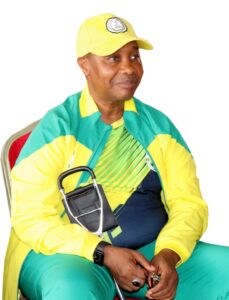 “As conceived by the Inspector-General of Police, IGP Usman Alkali Baba, who is passionate about sports development in the NPF, over 4500 male and female police athletes drawn from the 17 Zonal Commands and the Force Headquarters will feature and compete in several indoor and outdoor sporting activities which include athletics, football, basketball, table tennis, lawn tennis, judo, taekwondo, weightlifting, golf, chess, squash, shooting, karate, swimming, hockey, badminton, triathlon, handball amongst other sporting events.

“The 13th Biennial Police Games will yet again provide an opportunity for hidden sporting talents within the Force to be discovered as they will be given a platform to showcase their aptitudes to the world and subsequently make Nigeria proud as constantly exhibited by the Nigeria Police Force in sports business.

“Additionally, the event will afford the Force an ample occasion to engage the public, build goodwill and advance its community policing ideals anchored on mutual trust, understanding, and partnership with the public.

“It is pertinent to state that the Nigeria Police has produced prominent sportsmen and women who have gone on to raise the bar wherever they have flown the flag of the nation, it is in cognizance of this that the Police Games has evolved over the years to become an integral part of the rich history and proud tradition of the Nigeria Police Force and Nigerian nation at large.” The statement reads.