The 32 persons from Kala-Balge were ambushed at a deserted Mudu village in Dikwa Local Government Area, which is located about 45 kilometres away from Rann. They were believed to have been shot at close range. 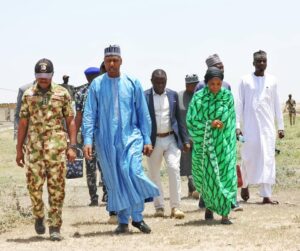 The governor, whose visit to Kala-Balge was for the seventh time in three years, urged residents to desist from going to deserted villages, especially to scavenge for metals because insurgents are engaged in searching for the same materials and can lay an ambush.

“The insurgents and their collaborators used to scavenge for metals and other abandoned household materials in deserted villages. These serve as raw materials for their fabrications. I urge you to desist from going to such places”, Zulum cautioned.

Governor Zulum during the visit held a meeting with Captain Mohammed Haruna Jibrin, the military’s commanding officer in Kala-Balge, involved with ongoing operations against insurgents.

Zulum in all his trips to local government areas usually meets with heads of the military to discuss and identify gaps in security arrangements for the purpose of strengthening them. 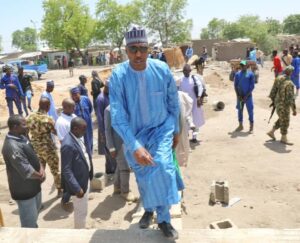 While in Kala-Balge, the governor inspected essential public facilities and announced a 100% increase in salaries for health personnel resident in Rann General Hospital.

“Any health worker that is willing to work here, we will double his or her salary and we will, Insha Allah, make sure that there is a routine shift to allow them to visit families”, Governor Zulum assured.

Zulum also gave two months deadline for the reopening of the completed hospital and schools as well as the completion of any ongoing projects in Rann, Headquarters of Kala-Balge LGA.

The governor was dismayed by the absence of some basic social amenities in the local government headquarters.

“We have completed the general hospital, schools, and the council secretariat while some other projects are ongoing. These projects should be completed in two months, Insha Allah. This is the only LGA in Nigeria that doesn’t have a functional school and this is unfortunate. We will do everything possible, Insha Allah, to ensure basic amenities are functional”, Zulum said.

The Permanent Secretary, Ministry of Works, Engr. Goni Dunoma, had earlier explained to the governor that officials could not complete some ongoing projects because of difficulties in accessing the town.

He however assured the governor that they would soon complete some that have reached advanced stages.

…Gets Decorated as Orange Ambassador   The Inspector-General of Police, IGP Usman Alkali Baba, on The Lagos State Signage and Advertisement Agency (LASAA), the agency saddled with the mandate to